In 1918, the Sudeten region was stripped from Austria and became part of Czechoslovakia. It remained so until the Munich Conference of September 1938, when an agreement was reached that Germany would annex the Sudetenland.

Prior to the signing of the agreement at Munich, Czech troops preemptively abandoned the German-speaking regions.  In the interim period between Czech and German control, the Sudeten German Party issued its own postage stamps in the areas of Asch and Rumburg.

Additionally, a single set of stamps was designed and printed for use in Sudetenland, but was never issued. 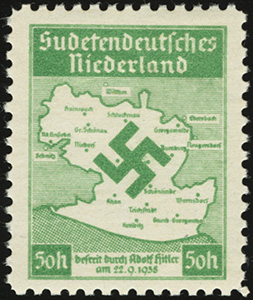 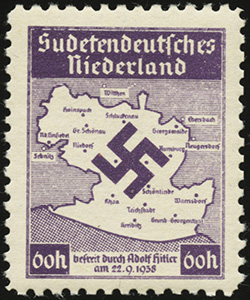 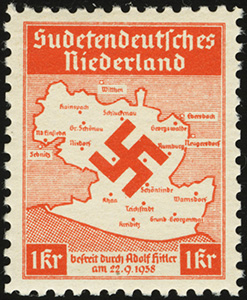 On 1 October 1938, the Sudetenland was formally ceded to Germany.  Until sufficient supplies of German stamps could be procured, the Sudeten German Party sold surcharged Czech stamps at local post offices.  This practice ceased on 20 October 1938.

Authorized issues exist for only six areas — Asch, Karlsbad, Konstantinsbad, Niklasdorf, Reichenberg-Maffersdorf, and Rumburg.  Any other Sudetenland overprints are commemoration overprints that were not valid postage.