During the period in which Germany sought to create a Greater Germany in Europe, postal services in the territories under German control were administered through military and civilian districts. Among the military districts were Dienstpost Alpenvorland in the Alpenvorland area of Austria, and Dienstpost Adria along the Adriatic Sea.

After World War II, a set of stamps appeared which, as the story went, were printed for use by the civilian postal system in combined Alpenvorland-Adria (a combined district which apparently never actually existed).  These stamps were allegedly in a shipment destined for Alpenvorland-Adria when they were nearly destroyed in a bombing raid on the Trieste railway station, and the sheets salvaged from Trieste were the only surviving copies. 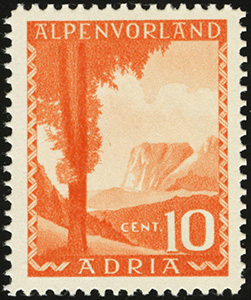 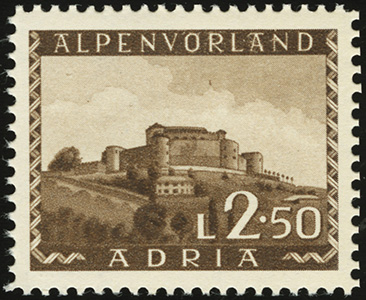 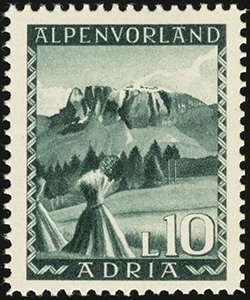 In the years since, the provenance of these stamps has been disproved.  They are now widely considered to be fantasy issues created post-war, and they are mentioned in Michel but not listed or valued.  Nonetheless, they are an interesting addition to any German collection.

For more on this interesting set, I highly recommend you consult the writings of Dr. David B. Ganse.