On 6 April 1941. German forces launched their invasion of Yugoslavia.  Within a matter of days, Croatian separatists declared the founding of the Independent State of Croatia (Nezavisna Država Hrvatska, or NDH) under the leadership of Ante Pavelić.

On 17 April 1941, Croatia officially entered the war on the Axis side by declaring war on Britain.

To support their German allies, Croatian men began volunteering in large numbers to serve in Croatian units attached to the Wehrmacht, Kriegsmarine, and Luftwaffe.

During the period, the NDH issued a large variety of postage stamps.  The entire collection can be seen here.  There were, however, two sets of stamps commemorating the Croatian Legion.  These are shown in this Croatian Legion section, in addition to in the NDH section of the website. 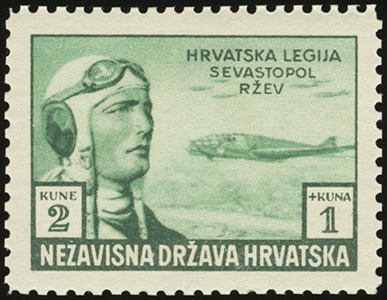 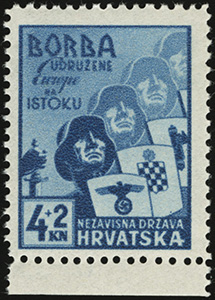 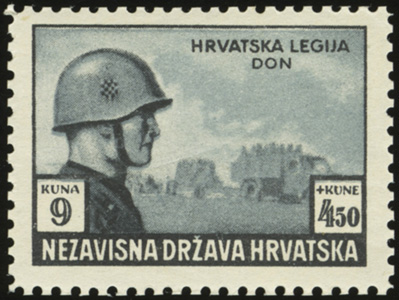 The Croatian Legion would see service primarily on the Eastern Front, with smaller forces supporting Italy until her capitulation.

The largest of these units was the 369th Croatian Reinforced Infantry Regiment of the Wehrmacht, which was commonly referred to as the Croatian Legion.  It saw action on the Eastern Front, most notably at Stalingrad.  The majority of the 369th surrendering to the Soviets on 2 February 1943 as part of the larger surrender of the German 6th Army outside Stalingrad.

The remains of the the 369th Croatian Reinforced Infantry Regiment were incorporated into a new unit, the 369th (Croatian) Infantry Division of the Wehrmacht.  The new Division was intended to see action on the Eastern Front, but instead spent the remainder of the war conducting operations against partisans in NDH territory.  The final remnants of the Croatian Legion surrendered to Allied forces on 11 May 1945.